Extreme Velocity, one of the most durable veteran race mares in the late 1990s, passed away at the Ruddick farm. Stohlers made the announcement via social media Friday, Nov. 16, 2018. 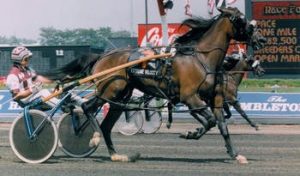 A daughter of Camtastic, Extreme Velocity began her career in Indiana at Hoosier Park, winning 15 of 16 races at three. She ventured to the 1997 Breeders Crown at The Meadowlands at four, using her “come from behind” style in the stretch to win at odds of 10-1 with John Campbell in the bike. Although she was not Indiana sired, the win by “EV” was one of the first times Indiana captured attention on a national stage.

“EV” went on to race four more years, earning 40 wins in 79 total starts with $856,070 in career earnings. Her mark of 1:50.3 in the Breeders Crown would remain as her fastest win for the Stohler family of Markleville, Ind.

Retired to the brood mare ranks, “EV” was just as impressive. She had nine foals with four of those taking marks under the 1:52 time barrier. Her most successful offspring was the mare Continual Velocity, who earned a mark of 1:50.2 and earnings in excess of $558,980. Ironically, all five of her offspring that were mares all raced. Her final foal was EV’s Last Finalee, a colt by Well Said that was a two-year-old in 2018.