Kaboomski exploded in the stretch to score a win in conditioned trotting action Wednesday, May 18 at Harrah’s Hoosier Park. Driven by trainer Daryl Bontrager, the Indiana sired trotter scored the win in 1:56.1. 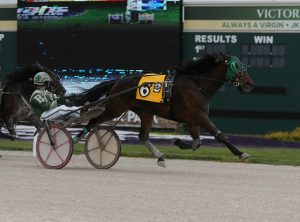 Kaboomski started his journey from post six and got away in mid pack as Starlit Thiswanman and Atlee Bender set the fractions of :27.4, :57.2 and 1:26.3, even pulling away from the field by four lengths at times. Several horses got in gear in the stretch, including Kaboomski and began to close in. Kaboomski took over late in the lane and trotted home in :28.4 for the two-length win. Golden Cross Stone and Trace Tetrick finished second over Buck Nome and Dan Shetler for third. Both Golden Cross Stone and Buck Nome are three-year-old sons of Dover Dan.

Kaboomski was overlooked at the betting windows, paying $16.20 for the win. The Whom Shall I Fear gelding is owned by Ira Steinberg of Illinois and was bred by John Wagler. The mile was a new lifetime mark for Kaboomski, who now has two career wins. He also topped the $50,000 mark in earnings with the victory.

From the third crop of Whom Shall I Fear, Kaboomski was only one of eight foals by the stallion that sold at auction as a yearling. He was the top seller, fetching a price of $9,000 through the sale ring at the Hoosier Classic Yearling Sale. He is the middle foal of three from the Broadway Hall mare Funny Fashion. His older half-brother, Back Door Man, has a mark of 1:54.2 and earnings of more than $130,000 and is still racing.