Ernest “Ernie” Gaskin, longtime advocate for Indiana Standardbred racing, was one of two people inducted into the Indiana Horse Racing Association Hall of Fame Sunday, Oct. 25 at Indiana Grand. The annual banquet rotates between Indiana Grand and Harrah’s Hoosier Park each season and was held for the seventh time since the Hall of Fame was implemented by IHRA. 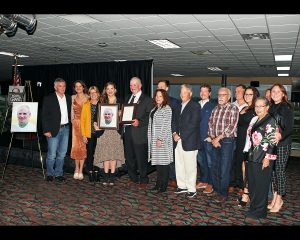 Ernie Gaskin is joined by friends and family for his induction into the IHRA Hall of Fame Sunday, Oct. 24 at Indiana Grand. Photo by Coady Photography

Gaskin was honored for his selfless support and continued work to establish the Indiana Standardbred breeding and racing program that is currently so successful in the state. He was one of three initial members appointed by the Governor of the Indiana Standardbred Breed Development, which laid the groundwork for programs, incentives, and Indiana Sires Stakes structure. A native of Vermont, Gaskin and his wife Darla moved to Indiana in the early 1990s and he immediately began work to further the racing industry in Indiana.

“I have to thank my partner, my wife Darla,” said Gaskin. “She should be in this photo with me. She has worked so hard right along with me to make racing a success in Indiana.”

Prior to coming to Indiana, Gaskin worked as second trainer for the famed Billy Haughton, assisting with such greats at Peace Corps and Nihilator. Since arriving in Indiana and opening his own stable based at his training and breeding farm, Crimson Lane Farm in Anderson, Ind., he has had several great racehorses, including four Indiana Sires Stakes winners. Jammin Joshua, purchased for under $1,000, earned a title and more than $600,000 in earnings. Recently Gaskin campaigned the pacing mare American Girl to more than $1 million.

Gaskin was joined by a large gathering of friends and family for the event. He even had a few family members drive in from Vermont, and his mother watched the ceremony live over the computer. He gave an emotional speech that relayed his passion for Indiana racing and horses. His daughters, Amanda Gaskin and Emily Ratcliff, unveiled the painting of Gaskin created by Melinda Spear-Huff of Sheridan, Ind.

“One thing I learned from Bill Haughton is he told me one time, ‘surround yourself with good people,’ and wow, what a great group of people we have in Indiana,” said Gaskin. “We have come a long way in the program and there are so many people who helped along the way. I’m so very proud of where we are now and what we have all accomplished.”

Gaskin was joined by the induction of Dr. James Carmichael (posthumously). Dr. Carmichael, a longtime resident of Sullivan County, was an initial member of the Quarter Horse Breed Development and later appointed to the Thoroughbred Breed Development where he served as chairman before his death in 2009. Gaskin worked with Carmichael in the early stages of developing the breeding and racing program in the state of Indiana.

The portraits of Gaskin and Carmichael will join the IHRA Hall of Fame wall at Indiana Grand located on the Mezzanine level.