ER Vegas, the Indiana sired three-year-old son of Time to Roll, scored an impressive win Wednesday, Dec. 2 at The Meadows. Bred and raised by Don and Rosie Eash of Greenfield, Ind., the sophomore gelding earned the win in 1:57.3. 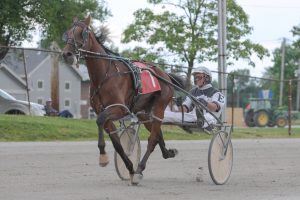 Starting from post one, driver Aaron Merriman got ER Vegas into the mix early, settling in behind early leader Caffeine Buzz and Brady Brown. They followed along through fractions of :28.0, :58.0 and 1:27.3 before tipping out and rolling right on by for the win by three lengths. Caffeine Buzz finished second, just a neck ahead of Rebel Devil and Chris Shaw for third.

Now trained by Jason Shaw, ER Vegas was a bit of a surprise to bettors, paying $10.00 to win in the conditioned pace. He is now owned by Mason Shaw, who recently purchased the gelding. It was the first career win for ER Vegas, who competed on the Indiana Sired Fair Circuit this season.