ER Rocky and owner-trainer-driver Don Eash earned a gate to wire win in a division of the $10,000 Jarrod Duncan Memorial Thursday, April 1 at Harrah’s Hoosier Park. The duo covered the mile in a time of 1:52.3. 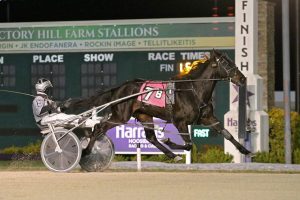 Owner-trainer-driver-breeder Don Eash scored a win with ER Rocky in the Jarrod Duncan Memorial series Thursday, April 1, picking up a new career best time of 1:52.3 in the process. Photo by Dean Gillette

Starting from post seven, ER Rocky fired to the lead and never looked back, posting fractions of :27.0, :55.4 and 1:25.2 before pacing home in :27.1 for the win. Just Kidding Katie and Jared Seekman finished one and one-quarter lengths back in second followed by Svengali and Joey Putnam for third.

ER Rocky paid $12.20 for the win. The sophomore son of Aracache Hanover was making his second start of the season for the Eash Stable, who also bred the gelding. The mark was a new career best and he now has three wins in 15 career starts with earnings over the $17,000 mark.

Also on the card, driver Joey Putnam started the month of April off on the right stride, earning two wins on the Thursday, April 1 racing program. Shamelful Eyes gave him his first win in the first race followed by a trip to the winner’s circle with Skylar in the evening’s fourth race.

Catch driving for trainer Britney Dillon, Putnam guided Shameful Eyes to a win in a division of the Rosie Harness Memorial. Starting from post four, Putnam secured the two hole behind Rock Marty and John DeLong, following along through fractions :27.0, :58.0 and 1:27.4. Shameful Eyes rallied past the leader in the stretch, pacing home in :27.0 for the win by one and one-half lengths in 1:55.0. Kak’s Rev It Up and Sam Widger, closed gamely for second over Rock Marty.

A bit of a surprise to racing fans, Shameful Eyes paid $13.40 for the win. She is owned by Charles Stein of Ohio and was bred by Spring Haven Farm of Ohio. The sophomore daughter of Arthur Blue Chip earned a new career best with the effort, her first start of 2021. She is now two for three in her brief career.

Putnam’s next win came in conditioned pace action in the fourth race of the night. Skylar, who hails from the Joe Putnam Stable, started from post three and got away in third as Dojea Rock and Brandon Bates established the tempo with fractions of :26.1, :57.1 and 1:26.4. The top pair were pressured heading into the stretch, giving Skylar the opportunity to find clearance and surge forward. The Indiana sired gelding paced home in :27.1 to score the win by one-half length, fending off A Remarkable Life and Jared Seekman. Dojea Rock finished third in the mile recorded in 1:54.3.

Skylar was another surprise to fans, paying $22.80 for the win. The Rockin Image five-year-old is owned by J P Racing LLC and Suttons Bay Racing. Suttons Bay Racing also bred the gelding, who was making his first start of 2021. He now has four wins in 44 career starts with earnings of more than $37,000. His career best time was taken last year at four at Harrah’s Hoosier Park in a time of 1:52.0.