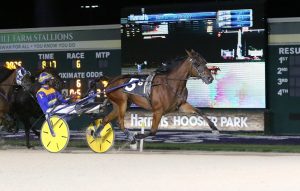 ER Norma got away just like she started, in the four hole. Hallmark Janie and Sam Widger were pursuing the lead, getting the top call by the quarter in :28.4 but their time on the lead was short lived as Getnthecarchuckie and Ricky Macomber Jr. were also headed to the lead right behind Hallmark Janie, crossing over before the half in :59.3. This prompted an outer flow with ER Norma flushed to the outside and Payday and Trace Tetrick flushed out in front of them to give them a second over journey to the three-quarters in 1:30.1.

In the stretch, ER Norma got out and found a clear path to trot home in :28.4 for the win by two and one-quarter lengths. Payday finished second over Getnthecarchuckie for third.

ER Norma paid $15.40 for the win. The Muscle Massive filly is owned and bred by Eash Racing Stable. Don Eash handles the training duties for the homebred freshman, who is a second generation product of the Eash Racing operation. Her mother, ER Norah, was successful on the Indiana circuit, earning a mark of 1:56.4 and earnings of more than $121,000 before being retired to the brood mare ranks. She is a daughter of Swan for All.

In other freshman action on the Wednesday card, Going Yard and Robert Taylor scored a closing win over Mare of the City and Joey Putnam in two-year-old pacing action in the maiden claimer. The Always a Virgin filly was a winner by a head over Mare of the City with both fillies closing in the lane. Image of a Beach and Michael Oosting, who cut most of the mile, finished third.

Going Yard paid $5.80 for the win. Terry Leonard owns the filly, who was also bred by Leonard. Robert Taylor trains.

In another division of the two-year-old maiden claimer for pacers, RJ’s Superfreak and Alvin Miller made a last half move to the lead for the win in 1:55.4, a final panel in :27.2. Transfer The Era and Kevin Lambright finished second over American Cactus and Bradley Ferguson for third.

RJ’s Superfreak, a $48.40 winner, is owned by Jacob Smith, who also bred the Luck Be Withyou colt. Alvin Miller trains.