ER Kim and Bradley Ferguson kicked off the Saturday, Nov. 6 racing program at Harrah’s Hoosier Park with a surprise victory. The 51-1 shot rallied home for the win in 1:53.3. 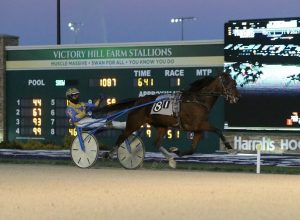 Starting from post eight, Ferguson moved ER Kim to almost the back of the pack as Kenziesky Hanover and John DeLong reached the top just after the quarter in :27.0. From there, Chiplosive and Sam Widger was out and rolling to reach the half first in :56.0 followed by Miss Smead and Ricky Macomber Jr., the third leader in the race before the stretch.

In the stretch, ER Kim had followed Miss Smead for some cover toward the leaders and found a clear path to the finish line for the win by one and one-half lengths, a final quarter in :27.3. Toy’s For You and Rick Plano finished second over Lindsey’s Pride and Kyle Wilfong for third.

ER Kim paid $104.20 for the win. The five-year-old Encore Encore trotting filly is owned by Eash Racing Stable Inc. and trained by Don Eash. The mare carries the farm initials as a product of the breeding program by Don and Rosie Eash.

ER Kim earned a new career best time of 1:53.1 earlier this year. She now has 14 wins in 111 starts with earnings of more than $167,000. She is out of Karen’s Karma who is a daughter of Eash’s talented trotting mare Bewitching Karen, multiple stakes winner in Indiana and former track record holder. Karen’s Karma is the first foal from Bewitching Karen and is the only one of racing age that has not raced out of 11 foals. Bewitching Karen’s most successful foal was Bound for Fame, who earned a mark of 1:53.4 and earnings over a half million.

Another surprise trotting victory was recorded in the $11,500 conditioned event with A Hopeful Prayer and Braxten Boyd scoring the win in 1:56.0 at 7-1. After making the lead after the quarter in :28.0, the Father Patrick filly followed Breckenridge and Andy Shetler to the stretch before popping back out and rallying home for the win by a neck over Bluebird Maverick and Trace Tetrick. Celebrity Pegasus and Peter Wrenn moved in late for third.

A Hopeful Prayer paid $17.00 for the win. The three-year-old filly is trained by Julie Miller and owned by his breeders, Andy Miller Stable Inc. and Little E LLC. It was the sixth win of the season for the sophomore, who has a career best time recorded at Pocono Downs in 1:53.3. earlier this year. After making only three starts last season, she now has $74,000 in earnings for her connections. The filly is well traveled this year. She competed in the $56,000 Circle City Trot last week at Harrah’s Hoosier Park, finishing fourth. Before that, she was at Harrah’s Philadelphia for two starts and has also raced at The Meadowlands, Vernon Downs and The Meadows in the past three months.