Once again, the creativity of Indiana’s horsemen and horsewomen were out in full force Saturday, Oct. 30 to usher in Halloween Weekend with Fright Night at the Track. A total of eight contestants were included in the contest. 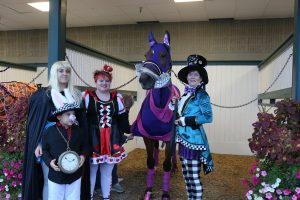 The Dan Shetler Stable was well represented at Fright Night during the Equine Costume Contest featuring this entry based on Alice in Wonderland. The horse even has pink hooves to help with the look of the entry. Photo by Dean Gillette

Costumes ranged from Alice in Wonderland, Barnyard animals, a farmer and her cow, Game of Thrones inspired entry, a big spider created over a very patient horse with Litle Miss Muffit, Monsters University, a bonfire setup, and a spider web draped over the back of a horse with a witch. The costumes were creative as usual and the work put into each entrant was overwhelming.

Emily Ratcliff and Michael Chamberlain served as hosts for the Equine Costume Contest with prizes awarded to the top contenders. A People’s Choice award was also presented.

The contest was held in the front paddock at Harrah’s Hoosier Park. A panel of judges voted to determine the winners of cash prizes. A large gathering was present for the contest, which has become a popular annual event for the track.

In addition to the Equine Costume Contest, kids were treated to candy in “Trunk or Treat” along with a pumpkin decorating station.