First Turn Stable, the fractional ownership program now in it’s fourth year at Harrah’s Hoosier Park, picked up its first win of 2019 Friday, June 21. Endeavor’s King made his first start an impressive one for the group with a win in the evening’s second race. 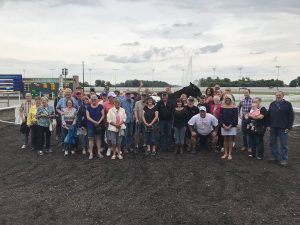 Endeavor’s King and Sam Widger, hidden in the back among the many owners of First Turn Stable, brought the fractional ownership program their first win of 2019 Friday, June 21. Photo by Linscott Photography

Driven by Sam Widger, Endeavor’s King sat in mid pack early on before moving out, eventually first over, and rallied home to a three-length win in 1:52.3. The nine-year-old gelding by Keystone Endeavor now has 28 career wins in 189 career starts with more than $168,000 in purse earnings. His best time was recorded as a four-year-old at Harrah’s Hoosier Park in a time of 1:51.4.

Trained by Jamie Macomber, Endeavor’s King is the third horse owned by First Turn Stable this season. Two other horses, King Leonidas and Medieval Dragon, were acquired for the group but were claimed out of their races for the owners. Endeavor’s King is the first to bring the large group of owners who turned out to see the race to the winner’s circle for 2019.