Caesars Entertainment Racing began a program three years ago titled “Empire of Hope” with the event geared toward the aftercare of racehorses at all its properties in the United States. Harrah’s Hoosier Park hosted its evening geared toward racehorse aftercare Saturday, July 31, raising several thousand dollars for the cause. 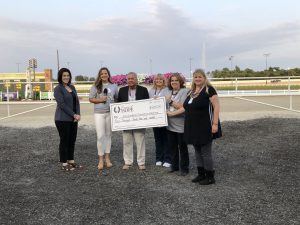 Members of the racing office staff join Rick Moore, vice president and general manager of racing, and Emily Ratcliff, race marketing manager and on-air analyst, for a presentation of more than $4,000 raised by them through bake sales and other fundraising efforts. Photo by Dean Gillette

The Harrah’s Hoosier Park racing office staff kicked things off with several bake sales. Several of the ladies on the team brought in baked goods and held other sales with all proceeds geared toward the Standardbred Transition Alliance (STA). Last year, the group raised just over $2,000 for the cause. This year, the efforts were rewarded with a total of $4,025 earmarked for the group.

The Empire of Hope event kicked off at 11 a.m. Saturday with a Charity Cookout in the Horseshoe Café on the backstretch. Jeff Fought, owner and breeder, provided the first 100 meals free of charge to those who attended and enjoyed a BBQ dinner. Horsemen were encouraged to make a $1o donation to the cause that supported STA.

When racing kicked off that evening, several promotions were in place for Empire of Hope. Racing fans could stop by Caesars Rewards and donate $5 to Empire of Hope and receive $5 in free slot play or race wagering in a special “Give $5, Get $5”. The evening also included Empire of Hope T-Shirt giveaways for $10 with all proceeds earmarked to STA.

Caesars Rewards members also had the opportunity to donate $5 and receive a mystery voucher, which could be worth up to $100. All proceeds went directly to STA.

Finally, several drivers and trainers took their turn in a dunk tank to raise money for racehorse aftercare. Tyler George, Trace Tetrick, Brandon Bates, Jeff Cullipher, Sam Widger, Matt Krueger and LeWayne Miller each climbed into the tank with fans donating $5 for three throws to try and dunk the horsemen.