Harrah’s Hoosier Park was one of four tracks that participated in the Caesars Entertainment properties’ first “Empire of Hope” to raise funding and awareness for racehorse aftercare programs. The evening was filled with extra curricular activities during the racing program, including an innovative racehorse fashion show. 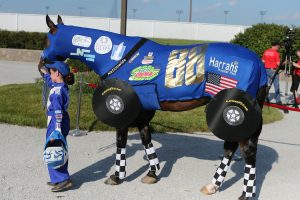 Bryce Nickells and her “race car” were selected as the winner of the fashion show at Harrah’s Hoosier Park during “Empire of Hope” night to raise funding and awareness for racehorse aftercare programs. Photo by Dean Gillette

Bryce Nickells was the winner of the fashion show with her horse dressed as a race car. Her mother, Brooke, and her grandfather, Bruce, created the costume, which was complete with sponsor names on the body of the suit created for the horse. The costume was complete with wheels on the side, and Bryce was dressed as race car driver Dale Earnhardt. Racing fans were able to vote for their favorite costume with $2 donations with all funding going to racehorse aftercare programs.

In addition to the fashion show, the evening including a visit from Standardbred racing’s richest horse Foiled Again and a booth for New Vocations Racehorse Adoption programs. Additional food was available to complete the evening that was set aside to honor such a worthy cause in the horse racing industry.

The Indiana Standardbred Association was a sponsor of the event along with Tito’s Vodka.