EL’s Disco Johnny and LeMoyne “Mooney” Svendsen scored an upset in optional claiming action Tuesday, May 17 at Running Aces. The Indiana sired four-year-old horse scored his fourth win of the season in the event. 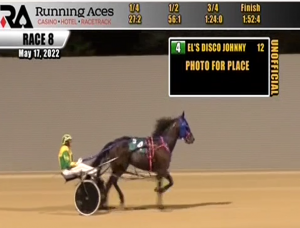 EL’s Disco Johnny made his Minnesota debut a winning effort for LeMoyne “Mooney” Svendsen Tuesday, May 17 at Running Aces.

Starting from post four, EL’s Disco Johnny got a good seat behind Caliber and Luke Plano out of the gate. Caliber set fractions of :27.2 and :56.1 as EL’s Disco Johnny tracked his every move. Caliber picked up the pace down the backside the second time, passing the three-quarters in 1:24.0. Allmyx’sliventexas and Nick Roland started the outer flow and moved up heading into the turn, but Caliber and EL’s Disco Johnny were strong on the front.

In the stretch, EL’s Disco Johnny tipped to the inside and challenged Caliber’s authority on the front end, getting to the wire first in 1:52.4, pacing home in :28.3. Caliber was a solid second over Zanetti and Rick Magee for third.