The Elite Series for two and three-year-old pacers and trotters is set for the Indiana State Fairgrounds Tuesday, Aug. 27. First post for the 14-race program is set for 11 a.m.

Kicking off the Elite Series will be two divisions of the two-year-old pacing fillies going for a purse of $8,250 for the first two races. Rock It Out, a winner at Converse this past week, will meet up with Rigginswind, also a winner at Converse. Rock it Out hails from the Donna Holt barn with Clifton Bell driving from post two while Rigginswind will start from post five with Matt Rheinheimer at the controls for trainer Curtis Sumpter. 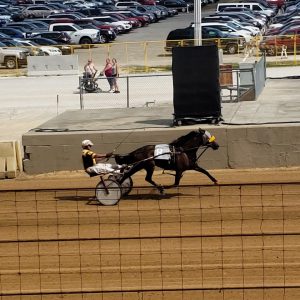 The second division will see several other multiple winners this season as ER Harper Rose and Don Eash will lead the post parade in post one. The Riggins filly has four wins and three seconds in 10 starts this season. She will face Makeitagaingo (Rheinheimer) who has six wins and Tropical Tracey (Trace Tetrick) who has earned seven wins.

Switching to two-year-old colt and gelding pacers, Townline Jated returns to the Indiana fair circuit seeking his sixth win in his ninth starts this season. Trained and driven by Jay Cross, the Riggins colt has drawn post one in the five horse field for the first division.

The second division of freshman pacing colts and geldings is headed by Fast Freddy Jo Jo and Mike Peterson. The Time to Roll colt has really come into his own recently and was also a winner at Converse Friday, Aug. 23. Fast Freddy Jo Jo starts from post four in the fourth race of the day.

Nampara, who has been a late bloomer this season on the fair circuit, will also be a factor in the race. The Jailhouse Jesse filly from the Doug Rideout barn has won two of her last three starts. The last time she was at the Indiana State Fairgrounds, she was a winner in 2:03.3, the fastest win time of the field.

Rideout also has a standout in the second division of freshman filly trotters. Sleeping Judy leads the way with four wins this season. The Cherry Hill Park filly will face the tough J-S Miss Carly, who is seven for nine this season for the Myers Stable and has a career best time of 1:58.3 taken at the Indiana State Fairgrounds.

Myers also has several powerhouse entrants in later races, including J-S Ivan the Great, six for nine this year, J-S Jasper, seven for eight, J-S Swanman, six for 16, and Jesse Popper, five for 15. The final race of the day is set to go to post at 2:15 p.m.