The Elite Series, which was scheduled for the Indiana State Fairgrounds Tuesday, Aug. 27, has been moved to the Jay County Fairgrounds in Portland. The 14-race program will begin at 11 a.m. 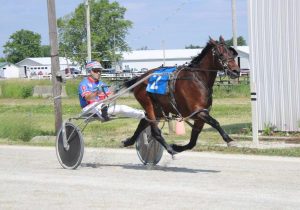 Mike Peterson will guide his Real Desire gelding, E Mode’s Desire in the Elite Series for three-year-old pacing colts and geldings at the Jay County Fairgrounds in Portland, Aug. 26, 2019. Photo by Diane Schuler

The racing program features the return of several Indiana Sired Fair Circuit Champions from the Indiana State Fair plus some horses that have found their best stride in recent weeks. The Elite Series offers purses ranging from $4,750 to $11,150. Three-year-old colt and gelding pacers will have only one division and will go for the top purse of $11.150. Three-year-old filly pacers will also have just one division, going for a total purse of $10,550. All other divisions of the Elite Series will have two divisions.

The division of three-year-old colt and gelding pacers will be a fierce battle between several top three-year-olds on the ISFC this summer. Isitlikeitlooks from the Jeff Dever barn has eight wins while Tellitlikeitwas from the Don Eash barn has six wins and the most money of the field at $30,485. However, E Mode’s Desire from the Mike Peterson Stable has the fastest time of 1:52.2. Five of the seven entrants have marks this season of under 1:57.0, showing how competitive the field is.

Three-year-old filly pacers will be led by the return of Dojea Rita, who has four wins, the quickest in 1:52.2. She is trained by Donna Loney and will be driven by Logan Loney in an effort to increase her already $50,000-plus bankroll. One of her biggest opponents will come from the outside post as Tellawoman and Joey Putnam will seek their 10th win of the year. The Tellitlikeitis filly has come into her own in recent weeks which will make for a great matchup for the Elite Series.