The $6 million Breeders Crown Championships kick off with a two-day event at Harrah’s Hoosier Park Friday, Oct. 30 featuring four finals on the 15-race card. The first race goes to post at 6 p.m. and the event is a ticketed only venue. Advanced tickets were sold to owners, sponsors, and Indiana horsemen to maintain a safe crowd for watching the event on track, complying with state COVID-19 regulations. For those who cannot attend, Harrah’s Hoosier Park will live stream the entire racing program on their Youtube page. 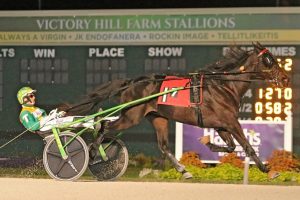 Swift Swanda, shown winning earlier this fall at Harrah’s Hoosier Park with Trace Tetrick in the bike, is the third choice on the morning line for the Breeders Crown Championship for freshman trotting fillies Friday, Oct. 30. Photo by Dean Gillette

Featured on the Friday card will be the $600,000 finals for trotters on both gaits and both fillies and colts and geldings. The first Breeders Crown Championship comes up in Race 8 featuring two-year-old filly trotters. Included in the field are two Indiana sired fillies, Ima Diamond Babe and Swift Swanda. Ima Diamond Babe will begin from post one seeking her second win in her 12th start for driver-trainer James Yoder. The Guccio freshman begins at odds of 30-1.

Swift Swanda from the Erv Miller Stable is the third choice on the morning line at odds of 9-2. The Swan for All filly has six wins in 11 starts going into the final and will be driven by Trace Tetrick from post eight.

Two-year-old colt and gelding trotters will be featured in the tenth race of the night with Brookview Bolt representing the Indiana sired program. The Swan for All freshman will begin from the second tier in post 10 with Matt Kakaley getting the call for trainer Ron Burke. Brookview Bolt has four wins and five seconds in 11 starts and has been tagged in the morning line at odds of 15-1.

Two-year-old pacing fillies are up next in the 12th race with Indiana sired Somethingbeautiful drawing the second tier post 10. The Always a Virgin filly, hailing from the Dylan Davis barn, has won eight of 10 starts this season. She will start off at odds of 15-1 and will be driven by Scott Zeron.

The final Breeders Crown Championship will place the focus on two-year-old pacing colts with JK Going West drawing post one. The JK Endofanera, driven and trained by LeWayne Miller, is on a roll, winning the Indiana Sires Stakes Super Final two starts back and finished third in his elimination. JK Going West will begin with odds of 12-1.