Electric Lad, the 14-year-old Indiana sired war horse from the Ryan Bellamy barn, has been nominated for the Foiled Again Iron Horse of the Year. The award is presented through Post Time with Mike and Mike and will be presented at the annual Dan Patch Awards Ceremony in Orlando in late February. 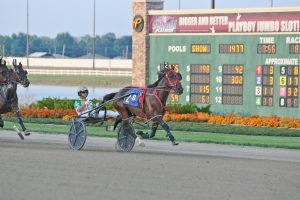 Electric Lad, shown at Harrah’s Hoosier Park with driver Corey Callahan, has been nominated for the 2019 Foiled Again Iron Horse of the Year Award. Photo by Dean Gillette

A son of Electric Yankee, Electric Lad has spent most of his career with the Bellamy barn. Based at Pacesetter Farm in Anderson, Electric Lad was initially claimed for $10,000. Now, the gelding has in excess of $450,000 and is still going strong until his mandatory retirement sets in Dec. 31, 2019.

His best time of 1:51.2 was taken at the age of nine. He has racked up more than 50 wins in 377 career starts and is still competitive.

Gina Parisi has taken care of Electric Lad during his campaign and endured the gelding’s tough mannerisms. He has greatness in his genes as he is a half brother to Mykindachip, who made nearly $1 million during his career and won 58 races.

In addition to Electric Lad, other horses nominated for the Foiled Again Iron Horse of the Year is Moon Lake, T Red, Dream Fair Van Dam and Bobjacks Angle A. Voting may be made at www.posttimewithmikeandmike.com. Winners will be announced during the Thursday, Jan. 16 program at 10:30 a.m.