This time last year, the world was saying goodbye to Foiled Again, who was closing out a career that brought him more than $3 million in earnings. He was forced into mandatory retirement when he turned 15 Jan. 1, 2019. This year, another horse that has a lot of meaning to Indiana will have his harness pulled for the last time as Electric Lad nears his 15th birthday Jan. 1, 2020. 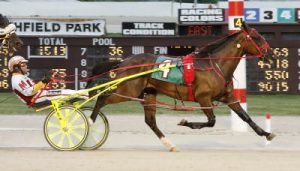 Electric Lad is closing in on the end of his career. He is shown above winning his 50th race at Northfield Park in 2018 with Aaron Merriman. Photo by JJ Zamaiko

A son of Electric Yankee, Electric Lad started his career off under the direction of Charles Clickner and was quickly sold due to his potential in Indiana Sires Stakes action. He was a mainstay with the Walter Haynes Jr. Stable for a few years and bounced through the claiming ranks with several Indiana trainers before landing in the hands of Owner-Trainer Ryan Bellamy in 2011. For the most part, he has been part of the stable since that time and will make his 375th career start in a division of The Linq claiming series at Harrah’s Hoosier Park Thursday, Oct. 31 in Race 4.

Electric Lad has drawn post one and will seek his second win of 2019 with Sam Widger in the bike for the Bellamy Stable at odds of 5-1. The 14-year-old war horse has 12 starts this year and earned a win two starts back in a time of 1:54.1. Overall Electric Lad has 54 career wins and earnings in excess of $450,000. His best time of 1:51.2 was taken at the age of nine when half of his 40 starts for the year were top three finishes.

Electric Lad has raced every year. He has won at least one race every season and with the exception of his two-year-old year, all of his best times have been under the 1:55.0 time barrier. John R. Miller of Topeka, Ind. bred the Indiana sired gelding who is out of the Precious Bunny mare Figmental, who has been a super brood mare. Out of six foals, five have earned in excess of $190,000 or more with Electric Lad having sibling such as Marks-Mindy, Mark’s Way, Marky Mike and Mykindachip.