In a two-hour plus meeting with the Indiana Horse Racing Commission (IHRC) Monday, July 13 at Indiana Grand, the main focus  was the petition for Eldorado Resorts Inc. (ERI) to move forward with the transfer of permits and licenses for both Indiana horse racing tracks. The IHRC approved the transfer 4-0 with Chairman Philip Borst ending with “Welcome to Indiana, Eldorado.” 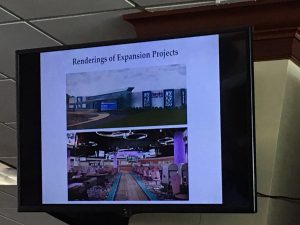 Eldorado Resorts Inc. provided a rendering of the expansion for Harrah’s Hoosier Park’s casino building, which will begin promptly following all approvals.

Several representatives from ERI were on hand to give testimony, including CEO Tom Reeg and Anthony Carano, president and COO. Joe Morris, recent addition to ERI as senior VP of racing, also testified on the commitment to Indiana horse racing, and noted a few things he’d like to see added to both racetracks, including more big days. Morris also said he’d like to see an owner’s area added at Harrah’s Hoosier Park and hopes conversations begin on increasing the number of both owners and Indiana breds. He also noted ERI has committed another 10 percent in 2020 for racing advertising and promotions, which will assist Harrah’s Hoosier Park with Breeders Crown, specifically.

Several individuals stood up to give their opinions on the sale, including Joe Putnam of the Indiana Standardbred Association, Ernie Gaskin, Dwayne Rhule, Nat Hill IV, and Terri Austin, representative for the Madison County area. Putnam also read a letter from Ohio Harness Horsemen’s Association Steve Bateson on the “New Scioto” and the improvements and enhancements that ERI has done in the past few months.

ERI also outlined other items that they will continue to support, including the Indiana Horse Racing Association Hall of Fame, Empire of Hope for racehorse aftercare initiatives, fulfill the remaining years of financial support and rebranding of Centaur Equine Specialty Hospital to Caesars Equine Specialty Hospital, update the Indiana Horse Racing Industry Economic Impact Study and continued support of local communities with an additional $250,000 in community donations and partnerships added in the 2020 post-merger. ERI also outlined long-term commitments such as extending the 12 percent agreement with horsemen, continuing to operate at minimum, the same number of race dates, and current staffing levels for racing.

ERI expects to begin expansions of gaming facilities quickly. Per recommendations from IHRC Executive Director Deena Pitman, who filed a report last week, ERI will create an Escrow capital fund of $25 million to be invested over a 10-year period for racing-related items only with a plan to refresh the investment every 10 years.

A flow chart from ERI was shown, with Joe Morris reporting directly to Anthony Carano, president and COO to allow prompt decision making for the best interest of racing. Rick Moore, vice president and general manager of racing at Harrah’s Hoosier Park, will report directly to Morris.