Edge of Rejoicing and Carrie Hollman earned their first win on the Indiana Sired Fair Circuit (ISFC) Monday, July 4 during a special Independence Day racing card at the Clinton County Fairgrounds. The duo dug in late for the win in 2:08.2. 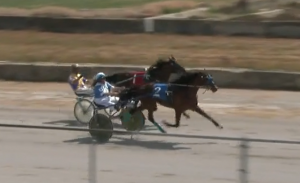 Edge of Rejoicing and Carrie Hollman earn their first career win on the ISFC Monday, July 4 at the Clinton County Fairgrounds.

Starting from post two, Edge of Rejoicing got away second with Hustle Me Home and Braley Ferguson leading the way to the quarter in :33.3. Miss Chum Chum was parked on the outside until after the quarter when she found a spot behind Hustle Me Home.

Hollman didn’t spend too many strides inside in third. She had Edge of Rejoicing back out to the outside down the stretch for the first time and caught up with Hustle Me Home, who was not giving an inch on the lead in 1:06.1. From there, it became a two-horse battle. Edge of Rejoicing challenged Hustle Me Home on the outside through the three-quarters in 1:37.4 and the two trotting fillies picked up steam. They came into the stretch together and went down the stretch together with Edge of Rejoicing getting the final call at the finish by one length. Virgne’s Aprillady and Jack Kieninger moved up late for third.

Edge of Rejoicing is trained by Hollman and owned by Duane and Amanda Hollman. Emanuel Girod bred the filly, by Sharp Edge. It was the first win in six starts and she’s only been worse than third one time so far in her brief career. After making breaks in her first two outings, she’s found her stride and has stayed flat in her last four starts.

The fastest two-year-old filly on the day was Swartz Bros Donna driven by Mike Peterson. The Colie’s filly led gate to wire for the win by a neck over Naturdays and Matt Rheinheimer. Jailhouse Garland and Gerald Miller finished third.

Swartz Bros Donna completed the mile in 2:07.2, a final panel in :29.3. She is owned by Roger Wilkin of Ohio and was bred by Amos Schwartz. Justin White handles the training duties for Swartz Bros Donna.

The ISFC returns to Frankfort Tuesday, July 5 in the “Quest for the Governor’s Cup.” The series will feature two-year-old pacers and three-year-old trotters in the second session at the Clinton County Fairgrounds.