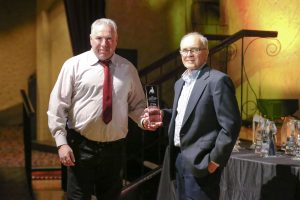 ISA Director Doug Rideout presents Don Eash with the award for top trainer of the Indiana Sired Fair Circuit once again for 2019. Photo by Dean Gillette

ER Kim started off the night in the evening’s fifth race. Ricky Macomber Jr. was in the bike while his wife, Jamie, also attended the awards banquet in Indiana. Starting from post six, Macomber rallied out of the gate with ER Kim and was on top by open lengths before the first quarter in :28.2. The duo continued to dominate throughout scoring the gate to wire win in 1:57.1 as mild upset winners in the conditioned pace. A four-year-old daughter of Encore Encore, ER Kim paid $9.20 to win in the contest. It was the first win in the second start of 2020 for ER Kim who was bred at Eash’s farm in Greenfield, Ind. She now has seven career wins and boosted her earnings to more than $59,000.

The second win for the Eash Stable came in the final race of the night as ER Sam was an even bigger surprise as a winner. Starting from post eight, ER Sam followed along for Macomber and made a big bid in the stretch to close in for the win by one length in 1:56.3, paying $32.60 for the win. Also a product of Eash’s breeding program, the four-year-old son of Shadyshark Hanover was also making his second start of 2020. He now has 12 career wins and in excess of $68,000 in earnings.

Another Indiana sired son of Shadyshark Hanover made his way to the winner’s circle on the Saturday card at Miami Valley as Pet Shark and Sam Widger were upset winners in the $32,500 Claim to Fame Series championship. Parked the entire mile, Pet Shark dug in gamely at the end for the win in 1:53.3. The seven-year-old gelding, owned by Chris Bulak and Ryan Bellamy and currently trained by Jason Brewer, paid $37.20 for the win. Pet Shark is now three for four in 2020 and has 19 career wins and more than $169,000 in earnings.