The Newton County Fair got underway with their 100th anniversary celebration Saturday, July 13. After horsemen enjoyed a complimentary breakfast, racing got underway at Noon with Don Eash taking home the top prize in four of the 12 races on the card. 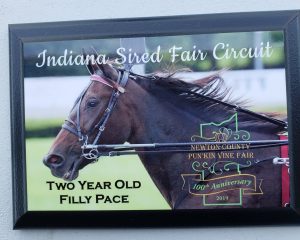 Each winner on the 12-race card at the Newton County Fair received a special commemorative plaque in honor of the 100th anniversary of the fair Saturday, July 13. Photo by Indiana Standardbred Breed Development

Eash’s day started off with a win in the second division of two-year-old pacing fillies as Rose Run Vision overcame a break after the start to rally back for the win in 2:06.2. Rock It Out and Clifton Bell finished second over BR Flying Rita and Jordan Ross.

The day also brought a first-time driver to the winner’s circle. Logan Loney made his driving debut a winning effort in a division of the two-year-old colt and gelding trot, scoring his first career win with Northern Commander in 2:23.0. Loney was a gate to wire winner for owners Northern Lane Farm and trainer Donna Loney. Logan also drove in two other races, picking up a second and fourth place finish.

Each of the winners on the day received a blanket from local sponsors as well as a commemorative plaque marking the 100th anniversary of the Punkin Vine Fair at Kentland.