The Don Eash Stable sent out two trotters in a conditioned race Saturday, Nov. 13 and came home with a first and second finish. At 38-1, Miss Smead and Ricky Macomber Jr. pulled in the upset over stablemate ER Kim and Bradley Ferguson for the win. 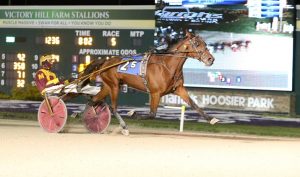 Miss Smead and Ricky Macomber Jr. score a win at odds of 38-1 on the Saturday, Nov. 13 racing card at Harrah’s Hoosier Park. Photo by Dean Gillette

Starting from post two, Miss Smead used very little early speed and got away in mid pack as Kenziesky Hanover and John DeLong set fractions of :27.0 and :56.2. At the half, Miss Smead was able to get cover behind Triathlon AS and Trace Tetrick to lead them into the stretch.

Macomber Jr. tipped Miss Smead around traffic and trotted home in :28.1 for the win by one and one-quarter lengths. Stablemate ER Kim came charging late in the lane for second over Delilah Seelster and Jason Brewer for third in the mile timed in 1:55.0.

Miss Smead, the longest shot on the board, paid 79.60 for the win. The four-year-old Guccio mare is owned by Eash Racing Stable and was bred by Pond-A-Acres and Martz Creek Farm. It was win number seven on the year for Miss Smead, who took a new lifetime mark earlier this year in 1:54.0 at Harrah’s Hoosier Park. She is now 14 for 74 lifetime with earnings of nearly $120,000. She has been competing at the top level for trotters all season in the Open and in Indiana Sires Stakes for older trotting mares.

Miss Smead was purchased for $20,000 as a yearling out of the Hoosier Classic Sale from the next to last full crop by Guccio. He was sold a few years ago into the driving horse business and little to no yearlings are now offered at public auction by the established Indiana trotter who made more than $1 million during his racing career.