E Mode’s Desire and owner-trainer-driver Mike Peterson scored a perfectly timed attack to win the first division of the George Williams Memorial Late Closer at Miami Valley Saturday, March 6. The duo covered the one-mile distance in a time of 1:52.4. 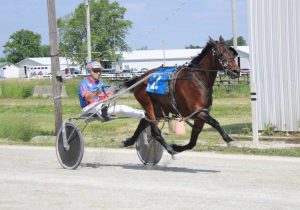 E Mode’s Desire and Mike Peterson, shown at the Clinton County Fairgrounds in 2019, added a win to their credentials Sat. March 6 in a division of the Williams Memorial at Miami Valley Raceway. Photo by Dean Gillette

Starting from post seven, E Mode’s Desire went to the back of the pack as Sunshine List and Mitchell Cushing made it to the lead by the quarter in :26.4. Their time on top was limited as My Wish Came True and Brett Miller took over before the half in :55.1, continuing to lead the way to the top of the stretch.

Peterson had moved E Mode’s Desire to the outside at the three-quarters in 1:23.1 before rallying home to get up for the win by a nose in the three-horse photo. Sunshine List finished a neck ahead of My Wish Came True, also an Indiana sired horse by J K Endofanera.

A longshot in the field, E Mode’s Desire paid $11.60 for the win. It was the first win of the season in four starts for E Mode’s Desire. Campaigned by Peterson his entire career, the Real Desire five-year-old now has 15 wins in 55 starts and more than $84,000 in earnings. His career best time was taken last year at four at Miami Valley in a time of 1:51.3. E Mode’s Desire spent most of his two and three-year-old campaigns on the Indiana Sired Fair Circuit with much success before stepping up into the pari-mutuel ranks full time last year. David Wayne Yoder of Shipshewana, Ind. bred the gelding.

Indiana sired Play Me Rock, driven by Trevor Smith, was also a divisional winner in the Williams Memorial on the afternoon card. The Rockin Image three-year-old gelding also went unnoticed at the betting windows, paying $11.40 for his win by a head in 1:53.2. Play Me Rock came off the pace for a well-timed move at the wire for the win over Tint of Mint and Kayne Kauffman and WF Eeyore and Trace Tetrick. Perry Smith owns and trains the sophomore, who was bred by Engle Equine LLC of Michigan. Play Me Good now has two wins in five starts for 2021. His win in the Williams Memorial was a new career best time.

Family Recipe was also a winner on the day, sitting in the two-hole behind Yacht Week and Kayne Kauffman and moving out in the stretch for the win by a neck in 1:51.3. Trained by LeWayne Miller and driven by Trace Tetrick, the Always a Virgin four-year-old now has two wins in six starts for 2021. His career best time was taken last year at three at Harrah’s Hoosier Park in 1:49.4. Family Recipe, owned by LeWayne Miller, Arnold Manders, Joe Vieira and Never 2 Late Stable, now has earnings in excess of $200,00.