New two-year-olds continue to emerge on the racing season this year at Harrah’s Hoosier Park and one of the latest ones is Dustin Theothers, who won his racing debut Thursday, June 30. Driven by Jimmy Whittemore, the Indiana bred won his first race in 1:54.0. 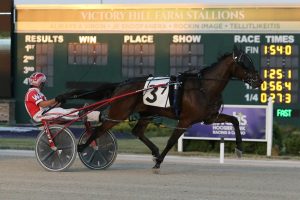 Dustin Theothers and Jimmy Whittemore post a win in 1:54.0 in the racing debut for the freshman trained by Jon Anderson at Harrah’s Hoosier Park. Photo by Dean Gillette

Dustin Theothers got away in mid pack from post three for Whittemore as Joker Rockwell and James Yoder set the tempo of :27.3 and :56.4 before horses began to form an outer flow, Dustin Theothers chose to stay inside through the three-quarters in 1:25.1.

In the stretch, Whittemore got clearance and asked Dustin Theothers to accelerate and he did, pacing home in :27.2 to score the two-length win. Glawbanera and Logan Loney, who has been racing on the Indiana Sired Fair Circuit, was close to the front throughout and finished second over Koa and Brandon Bates for third.

Dustin Theothers paid $13.20 for the win. The JK Endofanera freshman is owned by Gerald Haynes, who also bred him. Jon Anderson trains the gelding, who has a bright future on the Indiana circuit this season. He is a true Indiana bred as his mother, Jill Is So Pretty, is by Dontgetinmyway and raced on the Indiana circuit during her career, winning nearly $100,000 and taking a mark of 1:54.0, a time her son just equaled.

Earlier in the night, another two-year-old visited the winner’s circle as Bible Thumper and Daryl Bontrager won their racing debut in 1:54.3. The son of Luck Be Withyou jumped out to an early lead, passing by the quarter in :28.3 before Wattastory and Alvin Miller rolled up on the outside to take over after the half in :58.0.

In the stretch, Bible Thumper retook the lead and battled with Wattastory all the way to the wire, winning by three-quarters of a length, a final panel in :27.3. Attaboy Lloyd and Jared Seekman finished third.

Bible Thumper paid $9.60 for the win. He is owned by breeder Ira Steinberg and trained by Bontrager. He is a full brother to three-year-old Gather Ye Rosebuds, who took a mark earlier this year at Harrah’s Hoosier Park in 1:53.3. The family has a yearling colt this year named Evileye Fleegle by Tellitlikeitis.