Trotters were featured on the Sunday racing program at Harrah’s Hoosier Park with Dunbar Hall and Sam Widger scoring the win in the evening’s featured $22,000 Open Trot. 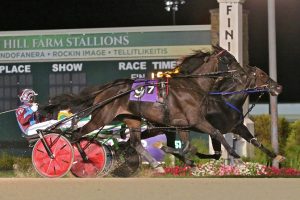 Dunbar Hall and Sam Widger grab the win by a head over Whata Swan and Trace Tetrick in the Open Trot Sunday, Sept. 26. Photo by Dean Gillette

Starting from the extreme outside post nine, Dunbar Hall showed little action early on as Kenziesky Hanover and John Delong reached the first quarter n :27.1 before clearing to the lead. A mild second quarter gave the field a breather to the top of the stretch.

In the stretch, Dunbar Hall and followed cover behind DG’s Caviar and Andy Shetler. Dunbar Hall tipped to the outside and trotted home in :27.2 for the win by a head over Whata Swan and Trace Tetrick, May Baby and James Yoder finished third in the mile trotted in 1:53.2.

Jeff Cullipher trains the Deweycheatumnhowe seven-year-old gelding for Pollack Racing LLC and himself as a co-owner. Dunbar Hall now has seven wins in 19 starts in 2021. The Walnut Hall bred gelding has in excess of $430,000 in earnings. His career best time was taken earlier this season at Harrah’s Hoosier Park in 1:51.2.