The first round of nominations for several of the state bred and sired series, stakes and late closers is quickly approaching. The Indiana Standardbred Breed Development recently mailed out the 2019 Indiana Nomination Booklet containing all the information for horsemen and horsewomen to get their stock into the program for 2019. 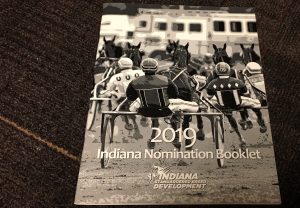 The Indiana Standardbred Breed Development provides a Nomination Booklet each year to assist horsemen and horsewomen in staking their horses for the racing season. (Photo by Tammy Knox)

The list of nominations due Friday, March 15 includes the Indiana Sires Stakes for three-year-olds. The first leg of several of the divisions begins in late May. Also, The Jerry Landess, The Miss Windfall, The Cardinal, and The Mya Tri late closing series are due March 15.

Also, those wishing to race on the Indiana Sired Fair Circuit in 2019 will need to nominate all three-year-olds by March 15. A fee of $300 is due at that time. Other fair-related payments due include the Elkhart County 4-H Fair Maple City Trot and Classic XXIX Pace are due. Most payments are due to the Indiana Horse Racing Commission.

In addition, several second round payments are due for open events at Harrah’s Hoosier Park, including the Dan Patch Stakes. All open event payments should be directed to The Hambletonian Society.

For a complete list of payments due and nomination forms, refer to the 2019 Indiana Nomination Booklet or find the pages in the March issue of the Indiana Standardbred Magazine.