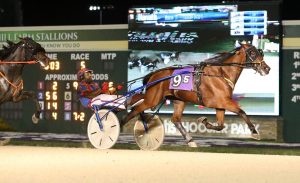 Starting from post seven, Taylor had Dr M ready for action when the gate folded. They headed straight to the lead and took over the top spot just after the quarter in :27.3. From there, Dr M got a breather to the head of the lane. The four-year-old son of Mr Cantab trotted home for the win by one length over Jesse V and Brandon Bates. Keegan Ho and Rick Plano finished third.

Dr. M was a big longshot, paying $34.80 for the win. He is owned by Missy Essig and Richard Keaton and trained by Essig. Judy Lunsford and Michael Bishop bred the gelding, who earned a new lifetime mark in the effort. He now has three wins this season and five overall after going unraced at two.

Dr M increased his career bankroll to more than $40,000 with his latest win. He is from the family of three six-figure winners, including Euro Classic, a trotter by Chocolatier, who has more than $200,000 in earnings and Escuela, an ABC Garland trotting mare with nearly $300,000 in earnings. His dam, Donven Fury, has produced 10 foals of racing age and all 10 have raced. She currently has a two-year-old by ABC Garland who recently took a qualifying time of 2:02.0.