Two-year-olds on both the trot and the pace took center stage Wednesday, Aug. 5 at Harrah’s Hoosier Park in Indiana Sires Stakes action. The first of two divisions for freshman pacing fillies had an exciting finish as DP Spookytooth and Michael Oosting fended off Martha Bigrig and Jared Seekman for the win by a head at the finish line. 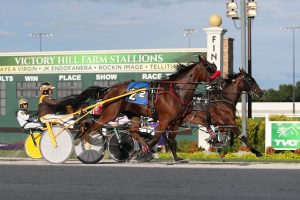 Starting from post two, DP Spookytooth got away in mid pack as Soul Kitchen and Trace Tetrick rallied out for the early lead, stopping the timer at :26.4 at the quarter pole. The tempo slowed down for the second quarter which was a cue for Oosting to get DP Spookytooth out and headed toward the front. The Tellitlikeitis filly took over at the head of the lane but was immediately challenged by Marta Bigrig. The two fillies battled to the wire, giving DP Spookytooth the slight edge at the wire in 1:53.4. Alexandria Z Tam and John DeLong finished third.

Owned by DP Standardbreds, DP Spookytooth earned her first career win in the second leg of Indiana Sires Stakes action. She is trained by Bill Webb and was bred by Steven Peterink and Randy Dickerhoff of Kendalville, Ind. She is the latest product from the race mare Straitequilanite, who raced on the Indiana circuit. She is a half sister to Diamondtequilashot, who has a mark of 1:51.0 and mover $300,000 in career earnings and is still racing.

The second division of freshman pacing fillies featured heavily favored Somethingbeautiful from the Dylan Davis barn. Driven by LeWayne Miller, the Always a Virgin filly went straight to the lead and never looked back, scoring the win in 1:52.2 with a final quarter paced in :26.3. Hot Mess Express and Sam Widger finished a length back in second followed by JK She’s Gordjus and Trace Tetrick for third.

Somethingbeautiful is owned by Howard Taylor, Edwin Gold, Abraham Basen and Richard Lombardo. She is now three for three in her career with her latest win marking a new career best.

Somethingbeautiful was a $30,000 purchase from the Hoosier Classic Yearling Sale last fall. She was bred by Aaron Stutzman.

In freshman trotting colt and gelding action, Brookview Bolt and Sam Widger took home top honors in the first division for trainer Ron Burke. The Swan for All gelding was a winner in 1:58.1 as the favorite in the field. Burke Racing Stable LLC, Knox Services Inc., J & T Silva-Purnel and Libby, and Weaver Bruscemi own the two-year-old that is now two for three in his career. His latest win was a new lifetime mark.

The final division for two-year-old trotting colts and geldings was won by Swingforthefences. The Swan for All colt was a winner in 1:57.3 for driver Peter Wrenn and trainer Melanie Wrenn. David McDuffee and L & L Devisser LLC owns the colt, who is now two for three this year.  All the Truth and Ricky Macomber Jr. finished second, just a neck back of Swingforthefences while D Swan on Call and Sam Widger finished close for third.