Harrah’s Hoosier Park drew for post positions of all Breeders Crown eliminations Tuesday, Oct. 20 and among the 161 entered, a dozen two and three-year-olds will compete in the elimination rounds hoping to advance to the finals set for Friday, Oct. 30 and Saturday, Oct. 31. 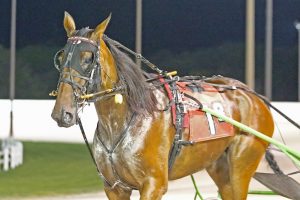 Rock Swan heads back to the winner’s circle after one of her Indiana Sires Stakes wins this year. The three-year-old filly will be one of 12 Indiana sired horses seeking to make the Breeders Crown finals set for Friday, Oct. 30 and Saturday, Oct. 31. Photo by Dean Gillette

Included on the Friday, Oct. 23 elimination rounds of Breeders Crown competition will be 12 divisions. The evening kicks off with an elimination round for two-year-old colt and gelding pacers in the third race with both JK Going West and Brookview Bullet included in the race. A total of 16 were entered over two divisions with hopes of advancing to the final.

JK Going West comes into the race fresh off a win on Hoosier Champions Night in the $270,000 Super Final. The JK Endofanera colt has won his last two starts and will begin his Breeders Crown journey from post six for trainer-driver LeWayne Miller.

Joining JK Going West in the race is Brookview Bullet, the Always A Virgin gelding with four wins in seven starts this year and a mark of 1:51.0. Brookview Bullet comes into the race from the outside post eight with Trace Tetrick in the bike for trainer Tyler George.

In the freshman pacing filly division, Somethingbeautiful will seek her ninth win in her 10th start this season in the first of two eliminations. Slated as the fourth race, the Always A Virgin filly starts from post three with Tim Tetrick in the bike for trainer Dylan Davis. Somethingbeautiful was a winner in Super Final action in her last start and brings a mark of 1:51.4 into the Breeders Crown.

Shifting gears to the trotting ranks, Brookview Bolt will represent Indiana in the first division of freshman trotting colts and geldings. Slated as the seventh race on the card, Brookview Bolt finished second in his last start in the Super Final of Indiana Sires Stakes action. Trained by Ron Burke, the Swan for All gelding has four wins and four seconds in 10 starts this year. Yannick Gingras has been called upon to drive him from post four.

Ima Diamond Babe will seek a spot in the Breeders Crown final in the two-year-old trotting filly first division. Starting from post four, the Guccio filly is trained and driven by James Yoder and has one win this season. She has been raced timed in 1:55.4, making her competitive for a spot in the final.

Yoder will be busy Friday as he will also hook up May Baby in the three-year-old trotting filly ranks. A daughter of Guccio, May Baby has won seven of 10 starts this season, including a new lifetime best in her last start in the Super Final in 1:52.2. She will start from post seven in the eight-filly lineup.

Joining May Baby for a spot in the final will be Rock Swan, Two-Year-Old Trotting Filly of the Year last season for trainer Erv Miller. Rock Swan has five wins and has not finished worse than third all year in 11 starts. With a mark of 1:53.1, the Swan for All filly will be driven by Trace Tetrick in the 11th race on the night.

Breeders Crown eliminations will begin at 6:30 p.m. both nights. The finals will start at 6 p.m. for the championships, presented by Libfeld-Katz Breeding Partnership for the 37th edition of the $6 million event. Eliminations were not needed for three divisions, so the Open Trot, Open Mares Trot, and the Open Pace will advance directly to the finals.