Dover in Motion and Ricky Macomber Jr. continued their winning ways, scoring their fifth win and remaining undefeated. The latest win was recorded in the fourth round of Indiana Sires Stakes for two-year-old colts and geldings. 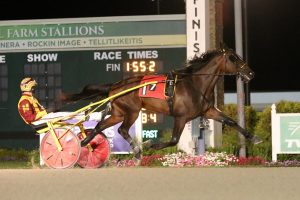 Starting from post one, Dover in Motion left with just enough speed to secure the spot behind Racer Dan and James Yoder through the first quarter in :28.4. Macomber moved Dover in Motion out and around to the lead at the half in :58.3, ahead by open lengths heading to the three-quarters in 1:27.4. At one time, the Dover Dan freshman was nearly six lengths ahead, powering home in :27.3 to score the win by three lengths in 1:55.2. Iwon’t Backdown AS and Elliott Deaton finished second. Swan Harbor and Brandon Bates were third.

Dover in Motion is owned by M & M Racing and Norbert Maza and trained by Jamie Macomber. Lyle Slabach bred the gelding who now has in excess of $110,000 in earnings. His best time was recorded in late July in 1:54.1. He is the top performer thus far for first crop sire Dover Dan.

Joining Dover in Motion as an ISS winner in two-year-old colt and gelding action was Ponda Adventure and Head Games. Ponda Adventure, driven by Trace Tetrick, took over at the half and scored a three-length win in 1:55.1. The Swan for All gelding is owned by Engel Stable of IL LLC, Louis Willinger, and Jerry Graham. Pond-A-Acres bred the freshman. He is trained by Erv Miller.

Head Games completed the divisions of ISS action with a win in 1:55.1. The Swan for All gelding, also trained by Miller, was parked through the half before clearing to the lead. He held strong in the stretch for the win by two and one-quarter lengths, a final panel in :28.1. Bill Beechy and Flying Manes LLC own Head Games. Larry Troyer and Alan Troyer bred the undefeated two-year-old in two starts. The mile also marked a career best for Head Games.