As 2021 winds down, final statistics are rolling in for the year. One two-year-old filly that completed the year near the top of her division was Dover Dance, the freshman trotting filly owned and trained by Greg Runyon of Portland, Ind. 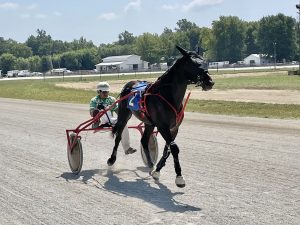 Dover Dance and Jay Cross prepare for their division of trotting fillies in the ISFC at the Shelby County Fairgrounds Tuesday, Aug. 25. Photo by Tammy Knox

Dover Dance reeled off wins in her first eight starts on the Indiana Sired Fair Circuit (ISFC), driven in all of her starts but the very first one by Jay Cross. The daughter of Dover Dan, who saw his first crop successfully on the track in 2021, ended the season winning 12 of 14 starts and never finished off the board. In the larger scope of things, she was ranked second in North America for two-year-old trotters, only trailing Bittrsweetsymphony, also a filly by Well Said, who won 13 of 17 starts. Dover Dance ended the season with nearly $25,000 in earnings racing primarily on the ISFC and her quickest mark was recorded in 1:59.0 taken at Portland during the second round of championship races for the ISFC. Richard Fry bred the talented filly, who was purchased from the Blooded Horse Sale’s yearling section for $7,500.

Another Dover Dan foal that excelled during the year was Dover in Motion, a two-year-old gelding who won eight of nine starts for the Jamie Macomber barn. With earnings of more than $300,000 while racing in the Indiana Sires Stakes, Dover in Motion was among the country’s top 20 earners for trotters during the season. Dover in Motion is owned by M & M Racing and Norbert Joseph Maza and was bred by Lyle Dean Slabach of Topeka, Ind. The gelding was tied as the third highest priced Dover Dan through the ring at $50,000 in the Hoosier Classic Yearling Sale.