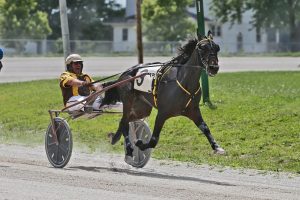 Rideout placed Mr Knowitall right on the lead for the gate to wire win in 2:04.3. It was one of six wins on the card for the Canadian native, who came into the day three wins away from the milestone.

Mr Knowitall is now seven for nine this season with his best time taken at Frankfort in 2:01.4. He is owned by Rideout’s wife, Julie, and Dr. Alan White. The You Know You Do gelding is second in the standings for freshman trotting colts and geldings and is headed to the $25,000 Governor’s Cup Championships this Thursday at the Indiana State Fairgrounds. All seven of his wins this year have been on the ISFC.

Rideout began his driving career in 1986. He has driven in more than 22,000 races and in addition to 3,003 career wins now, he has more than 3,000 seconds and 3,000 thirds. Overall, he has accumulated more than $11 million in purses. With several years of earnings over the half-million mark, Rideout’s best season was recorded in 1997 when he won 244 races with nearly $600,000 in earnings. Last year, Rideout won 109 races. This season, he has already posted 71 wins and is once again maintaining a .394 driving average.

As a trainer, Rideout is approaching another milestone. He has 972 career wins and more than $7 million in purses. Rideout is a native of Mississauga, Ontario. He and Julie now reside in Winchester and have been involved in Indiana racing for decades.