It was a banner year for Doug Rideout in 2021. The Canadian native who has been in Indiana for the past 19 years earned leading driver and trainer honors on the Indiana Sired Fair Circuit and campaigned numerous freshman and sophomore winners over the season. His success was recognized by Rich Fisher, who did a profile on Rideout in the February issue of “Hoof Beats.” 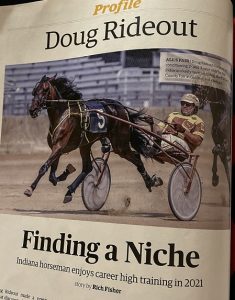 Doug Rideout, who won the ISFC title in 2021 for both driving and training, was featured in the February issue of “Hoof Beats.”

Rideout and his wife, Julie, are profiled on their work with younger horses and their concentration on the Indiana Sired Fair Circuit (ISFC). The Rideouts settled in Randolph County in 2002 near Winchester in the eastern part of Indiana and race on both the fair and pari-mutuel circuit each season. Overall, they won 98 races and earnings of more than $779,000 last season, a career high for the stable.

Some of the standouts for the stable included Queen of All, Four Under Par, King Felix, Pure Cotton and Hand Dover Dan, who was co-owned by Julie’s daughter, Gracie Rosson. Fisher points out in the article the Rideouts sell their three-year-olds at the end of the season to make room for incoming babies. Rideout notes in the article that every one of their two-year-olds made it to the races last season.

Rideout got into the horse racing business through his uncle Bill Cass. When he went out on his own, he started in Michigan and Ohio before moving to Indiana.

In addition to running a stable, Rideout serves on the board of the Indiana Standardbred Association.