Double A Goldrush and Tyler Smith turned in a commanding wire to wire performance Tuesday, Jan. 18 at Miami Valley Raceway to score the win in the $10,000 conditioned trot. The Indiana sired gelding won the event in 1:57.0. 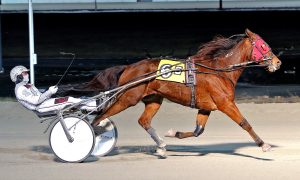 Double A Goldrush and Tyler Smith kick off the 2022 campaign with a win in conditioned trot action at Miami Valley Tuesday, Jan. 18. Photo by Conrad Photography

Starting from post six, Double A Goldrush barreled out to the lead from the starting gate and was on top with authority at the quarter in :28.2. The Elegant Man gelding continued to dominate at the half in :58.2 and three-quarters in 1:26.4 before drawing away from the field, winning by five lengths. Top Dollar, driven by Trace Tetrick finished second over Count On Barney and Hugh “Sandy” Beatty for third.

Double A Goldrush was the favorite in the field, paying $3.80 to win. Michael and Laura Lee and Terry Leonard, all of Illinois, own the eight-year-old veteran. Double A Acres bred Double A Goldrush, who is trained by Ross Leonard.

It was the first start of the year for Double A Goldrush. Overall, he has 32 career wins in 142 career starts with more than $348,000 in earnings. His career best time was taken at five in 1:53.0 at Harrah’s Hoosier Park, a mark he equaled as a six-year-old.

He has been part of the Leonard Stable since the end of 2017. He sold as a yearling for $14,000 in the Hoosier Classic Yearling Sale, the second highest priced yearling by Elegant Man during the 2015 sales. To date, Double A Goldrush is the third richest son of Elegant Man and the second fastest. Elegant Man, a son of Malabar Man, took a mark of 1:53.2 during his career and earned more than $850,000. His first year standing in Indiana was in 2008. Overall, Elegant Man has produced 57 starters with 12 earning in excess of $100,000. The final year he was utilized as a stallion in Indiana was in 2018 when he sired one foal.

Double A Goldrush recently qualified at Miami Valley to prepare for his eight-year-old campaign. He raced through the Indiana meet before taking a break from racing leading up to his 2022 debut.