Double A Goldrush, a veteran trotter from the Ross Leonard Stable, was a dominant winner in conditioned action Saturday, May 1. Driven by Peter Wrenn, the gelding was a winner in 1:55.2. 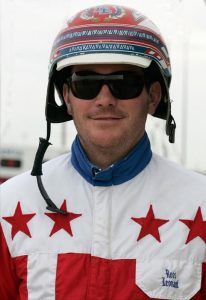 Ross Leonard has had Double A Goldrush in his barn his entire career. The seven-year-old Indiana sired son of Elegant Man earned his first win of 2021 Sat. May 1 at Harrah’s Hoosier Park

Starting from post six, Wrenn had a game plan to get to the early lead and was parked on the outside with Double A Goldrush at the quarter in :27.4. The Elegant Man seven-year-old took over down the backstretch and never looked back, setting middle fractions of :56.2 and 1:26.1.

In the stretch Double A Goldrush hit another gear and trotted away from his opponents, winning by nearly seven lengths at the wire. Mclass and Joey Putnam finished second over Bumblebezbuzz and Andy Shetler for third.

Double A Goldrush is owned by Mike and Laura Lee and Terry Leonard. The Double A Acres product scored his first win of 2021 and his 27th overall in 119 starts. His career best time remains at 1:53.0 taken as a five-year-old at Harrah’s Hoosier Park. The Indiana sired veteran has been part of the Leonard Stable since the beginning of his career, winning four of nine starts at two. He now has in excess of $317,000. Double A Goldrush was a $14,000 yearling purchase by the Leonards at the Hoosier Classic Yearling Sale. He was one of 17 yearlings by Elegant Man sold at auction that year. Elegant Man does not stand at stud any longer in Indiana. His last year standing was in 2018.

Later in the card, Whata Swan earned another victory in the Open Trot. Driven by Trace Tetrick, the five-year-old son of Swan for All took over the top spot after the quarter in :27.2 and kept the field at his heels, winning in 1:53.0. Jeffery P and Ricky Macomber finished one and one-half lengths back in second over Flagman and Rick Plano for third.

Whata Swan is trained by Tony Quevedo and owned by John Barnard. The Leonard Miller bred stallion is now three for five this season and pushed his career earnings to more than $264,000 with the win. He was just one tick off his career best time of 1:52.4, taken earlier this season at Harrah’s Hoosier Park.