Dontcloseyoureyes may be a throwback to the Indiana sired program, but she still knows how to win. The seven-year-old daughter of Dontgetinmyway out of the Indiana sired mare Crackling Rose, who is by Til We Meet Again, scored a win at Cal Expo Friday, March 27, the only harness track still running in the United States outside of some qualifiers at training centers in Florida. 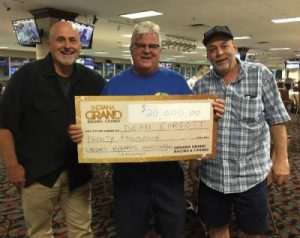 Starting from the second-tier post 10, Dontcloseyoureyes and John Roberts were in hot pursuit of the lead position and grabbed in just after the quarter in :28.2. From there, the mare was able to slow down the pace a bit to get a breather before rolling home a winner in 1:57.0. Greekona and Braxten Boyd finished two and one-quarter lengths back in second followed by Youroldlov-eltter and LeMoyne Svendsen for third.

Owned by Fabiola Quevedo and trained by Edwin Quevedo, Dontcloseyoureyes earned her fifth win of 2020. She now has 17 career wins and is approaching $100,000 in career earnings. Her best time to date was taken at Harrah’s Hoosier Park as a three-year-old in 1:54.3 for former trainer Chuck Stillings and owner Dean Ehrgott of Camby, Ind. Ehrgott and Stillings serve as the breeder on Dontcloseyoureyes.

Ehrgott and Stillings teamed up on several standout Indiana sired horses in the early 2000s. Included in their stable was Radar Contact, who took a mark of 1:49.2 and earned nearly $1 million in her career and Crackling Rose, the dam of Dontcloseyoureyes, who earned a mark of 1:54.4 at Harrah’s Hoosier Park during her career.

Although Ehrgott isn’t active in the business anymore, he is still an avid horse racing fan. Last June, he scored the top spot in the Caesars Rewards Handicapping Challenge between all Caesars-owned racetracks, earning $20,000 and a seat in the National Horseplayers Championship in Las Vegas.