John Dolenski has been a longtime fan of Standardbred racing. He was a frequent visitor to Harrah’s Hoosier Park where he would stand trackside during the races. That position eventually led to a job in the business and now he is thriving as a groom for the Brandon Bates Stable. 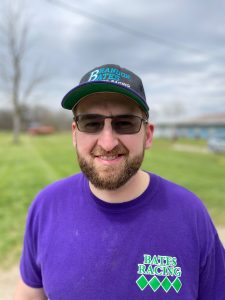 John Dolenski is not only a groom for Brandon Bates, he is one of the state’s biggest fans of Standardbred racing. Photo by Brandon Bates

“I first met John outside the winner’s circle,” said Bates. “He was always standing around talking to the drivers. He eventually came into a few of my winner’s circle photos and one night, he invited me up for a drink after the races in the grandstand. That’s how I met John.”

That meeting between Dolenski and Bates led to a partnership that is now going on strong for nearly three years. Dolenski, a native of Anderson, still works at Harvest Market in Anderson and now works a second job as a groom with Bates at the training center in Warren, Ind., 50 minutes north of Anderson.

“John had zero experience around horses and no one would give him an opportunity to learn,” said Bates. “He has learned and taken care of Swandre the Giant and Priceless, among others, and does it all with Asperger Syndrome.”

Dolenski’s disability has not stopped him from absorbing all aspects of racing. And, his introduction to the behind the scenes of the sport has a pretty impressive start that includes caring for two of the state’s top champions the past two years in Swandre the Giant and Priceless. John has been trackside for both of their careers at Harrah’s Hoosier Park, and been there to greet them in the winner’s circle on numerous occasions.

When racing resumes this season, Dolenski will be right there with Priceless as she begins her sophomore campaign. He will also accompany the newest member of the barn, Phelgon, a two-year-old Rockin Image filly that will make her racing debut this summer at Harrah’s Hoosier Park for the Bates Stable.