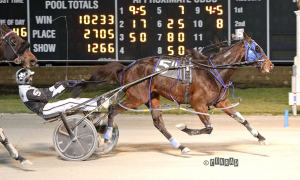 Starting from post four, Dojea Gizmo got away third as Lexus With a View A and Mitchell Cushing set the tempo through fractions of :27.3, :54.0 and 1:22.1. In the stretch, Dojea Gizmo found the room he needed to soar to the lead, posting a final panel in :29.2 for the win by a length over Kneedeep N Custard and Tony Hall. Sectionline Bigry and Brett Miller finished third.

Dojea Gizmo was a mild upset winner, paying $16.00 for the win. He is trained by Todd Luther for Black Magic Racing of Ohio. The four-year-old Tellitlikeitis gelding was bred by Dan Shetler and Dojea Stables before being sold to his current connections this past March.

After going winless as a two-year-old, Dojea Gizmo turned in a stellar season at three, winning 10 of 22 starts, including several stakes races. His winning ways continued this season with six wins and more than $136,000 in earnings. Overall, he has 16 wins in 58 starts with $286,000 in earnings. Earlier this year, he took a new lifetime mark of 1:49.0 at The Meadowlands.

Another Indiana sired horse that was a winner on the Saturday card was Omega Cat from the Steve Brannan Stable in the $30,000 Open Pace. The five-year-old Real Desire gelding traveled three wide in the final turn and rallied home for the win by a head in 1:53.2. Brett Miller drove Omega Cat to the win for Brannan, who also owns the gelding. Brannan and Fred Shiery bred the son of Fishen Mermaid, a daughter of Whitefish Falls.