Three divisions of the Jerry Landess Series took place Wednesday, June 17 with one surprise winner. Dojea Gizmo, trained and driven by Dan Shetler, rallied home for a win in the final leg, stopping the timer in 1:53.2. 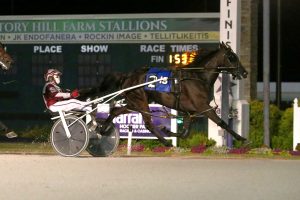 An inside post kept Dojea Gizmo close to the front from the start. La Tomcat and Don Eash led the way through the first quarter in :28.1 before Ready Set Jet and Sam Widger took over, leading the way through the half in :57.1. That was the cue Shetler needed to get Dojea Gizmo out and rolling. The duo moved up in the final turn, in perfect striking distance for the stretch drive.

Dojea Gizmo paced a final panel in :26.1 to win the race, one and one-quarter lengths over Frankiepark and Ricky Macomber Jr. Townline Big Rigs and LeWayne Miller finished third.

Dojea Gizmo is owned by Shetler and Dojea Stables, who also bred the sophomore son of Tellitlikeitis. The gelding has solid bloodlines as he is the son of Postmark, who scored numerous wins during her racing career at Harrah’s Hoosier Park.

It was the first career win for Dojea Gizmo and his first start of 2020. He used two qualifiers at Harrah’s Hoosier Park to prep for his sophomore campaign.

Earlier in the night, Crook Boyzz and Trace Tetrick won the first division of the Landess Series by a strong four and one-quarter lengths. The Always a Virgin gelding paced home in :26.1 to win in 1:51.3. Odds On Brexit and Peter Wrenn finished second followed by Star Island and Widger for third.

It was the first career win in three career starts for Crook Boyzz, who only had two starts last year at two. Trained by Brett Selby, Crook Boyzz lowered his previous mark by eight seconds. He is owned by John and Robert Esposito and Selby.

The other Landess division was won by Skyway Trooper and Brandon Bates in a time of 1:54.0. The Hector Herrera gelding turned in a gate to wire performance for the win.