Dojea Gizmo, the three-year-old Indiana Sires Stakes contender from the Dan Shelter Stable this past summer, scored a win at Harrah’s Philadelphia Sunday, Dec. 20. Now under the direction of trainer Ron Burke, the Tellitlikeitis gelding won in 1:51.2. 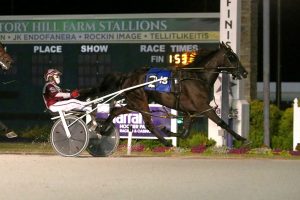 Driven by Yannick Gingras, Dojea Gizmo left the gate from post six in the $11,600 conditioned pace seeking the front. Following the quarter in :26.4, he was able to accomplish his goal and secure the top spot away from Prince of Tides and Tim Tetrick. From there, Dojea Gizmo set the tempo, striding home in :27.4 for the half-length win over Tyga Hanover and George Napolitano, who moved up late for second. Major Pocket A and Montrell Teague finished third.

The favorite of the field, Dojea Gizmo paid $3.00 to win. He is now owned by Burke Racing Stable LLC, Weaver Bruscemi LLC and Philip Collura. Dan Shetler and Dojea Stables bred the sophomore, who was orphaned as a baby and raised at the Dojea Stables farm in norther Indiana.

Dojea Gizmo now possesses more than $150,000 on his card. His career best time remains at 1:50.4 taken at Harrah’s Hoosier Park earlier this season.