Dirty Talk, trained and driven by Clay Craib, scored her first career pari-mutuel win to kick off February racing at Miami Valley Raceway Tuesday, Feb. 1. The four-year-old is now one for two in 2022. 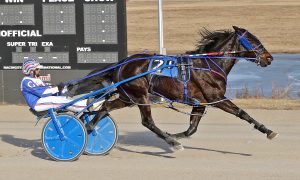 Craib used his inside post two to his advantage and sent Dirty Talk to the lead, posting fractions of :29.2, 1:02.1 and 1:30.2, picking up the pace for the second half of the race. Horses were parked during the middle portions of the race, but when the flow stalled, Chips First Mess moved three wide for Trace Tetrick around the final turn.

In the stretch, Dirty Talk pulled away from the field, earning the win by five lengths with a final quarter in :29.1 in 1:59.3. Girl Shezarockin and Jeremy Smith finished second followed by Indiana sired Vel Goodgollymolly, driven by Cameron McCown, for third.

Dirty Talk was the favorite of the field, paying $4.80 for the win. The JK Endofanera mare is owned by Triple R Stables of Anderson, Ind. It was her fourth career win of her career after going unraced as a two-year-old. Her career best time was taken last year at Harrah’s Hoosier Park in a qualifier in 1:59.0.

Dirty Talk is a daughter of the Sportsmaster mare, No Respect, who took a time of 1:51.4 and earned more than $440,000 during her career. Dirty Talk is the first foal of four total, with a half-brother, Ball Hog, who is a three-year-old in 2022 and Strong in the Face a two-year-old in 2022, both by Rockin Image. The family also has a weanling colt by Check Six named Check the Box.

Dirty Talk is part of the first crop of JK Endofanera. She was a $13,000 purchase from the Hoosier Classic Yearling Sale.