Dirt E Rock and driver Mark MacDonald scored the win in the MLK Remembrance Pace Saturday, Jan. 15 at The Meadowlands. The race was held in honor of Martin Luther King just days before MLK Day in the United States. 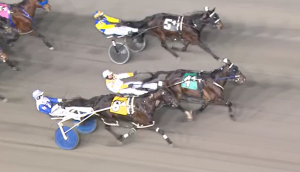 Dirt E Rock and Mark MacDonald (No. 4) split horses in the stretch to score the win in the MLK Memorial Pace Saturday, Jan. 16 at The Meadowlands.

Starting from post three, Dirt E Rock got away in fifth as Missile Seelster and Jamaal Denson secured the top spot through the quarter in :28.3. A Stud Named Sam and Eric Tharps Jr. made a big move down the backstretch, not giving up until they got to the lead after the half in :56.4. From there, the outer flow of traffic began to form with Dirt E Rock second over to the three-quarters in 1:25.4.

At the top of the stretch, five horses were spread across the track with A Stud Named Sam holding strong on the front. It appeared Dirt E Rock had too much ground to make up to get to the wire first, but the front horses began to tire and he was able to pace home in :28 seconds to get the win by a neck over Baileys Rock N and Scott Zeron. Missile Seelster held on for third.

Dirt E Rock paid $4.80 for the win. The five-year-old gelding is a true Indiana sired product. He is the son of Rockin Image out of the Always a Virgin mare Dirt Diamond. He is owned and trained by Rachel Oenema of Pennsylvania. Hugh and Susan Lacey of Missouri bred the gelding, who won his first race of 2022 in 1:54.4 in the $15,000 conditioned pace. Dirt E Rock has seven wins in 43 career starts. His career best time of 1:51.4 was taken last year at Harrah’s Hoosier Park. He now has in excess of $40,000 in earnings.

Dirt E Rock, the one-time claimer in Indiana, raced at Harrah’s Hoosier Park through the end of the season before venturing to Harrah’s Philadelphia for Oenema. He began his 2022 campaign at The Meadowlands, finishing third in his first start followed by his win in the MLK Remembrance event.

Dirt E Rock is the first foal from Dirt Diamond, who took a mark of 1:3.4 during her career that brought in $130,000. Dirt E Rock is a full brother to Dirty Judge, who won in 1:53.4 last year and is currently racing at Miami Valley. They also have a full brother named Dirty Image who will head to the track as a two-year-old in 2022.