DG’s Caviar and trainer-driver Andy Shetler headed a field riddled with Indiana sired talent and came home the winners in a near gate to wire effort.  The four-year-old Prime Time Caviar horse scored the win in 1:55.0. The top three finishers were Indiana sired in the Open Trot Monday, Dec. 7 at Pompano Park. 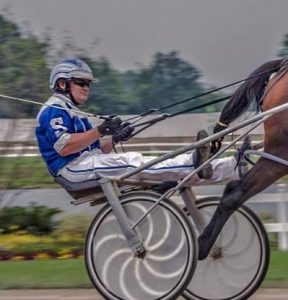 Starting from post eight in the nine-trotter lineup, Shetler had DG’s Caviar ready to roll when the gate folded. The duo headed toward the leaders as It’s a Herbie and Verlin Yoder set the first quarter in :28.2 with DG’s Caviar to his outside. DG’s Caviar had made the lead at the half in :57.1 and kept the tempo lively all the way to the finish line for the win. Sooo Handsome and Rick Plano finished second as a longshot of the field followed by Keegan Ho, also trained by Plano but driven by David Ingraham, to round out the Indiana sired trifecta.

DG’s Caviar continues to add to his $100,000-plus bankroll. His career best record remains at 1:53.1 taken earlier this season at Harrah’s Hoosier Park.