DG’s Caviar has been nearly unstoppable among the best trotters in South Florida this winter, and he added another victory to his credentials Monday, Dec. 28 at Pompano Park. Under the guidance of trainer-driver Andy Shetler, DG’s Caviar trotted home for the win in 1:53.0 in the evening’s featured $11,500 Open Handicap Trot. 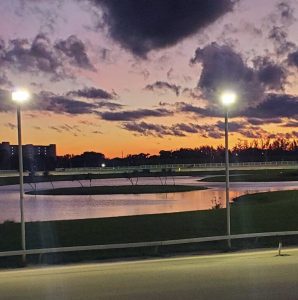 DG’s Caviar was a winner in the Open Trot at Pompano Monday, Feb. 28. Here’s a shot of the infield lake at track at Pompano Park. Photo by Gabe Prewitt

Starting from post seven, Shetler floated DG’s Caviar over to the inside path in mid pack as BJ Lorado and Andy Santeramo set early fractions of :27.0 and :56.0. Shetler had DG’s Caviar out and ready to role around the final turn, moving up into second on the outside of Muscles for Life and Wally Hennessey, who took over the top spot at the three-quarter mile marker.

In the stretch, DG’s Caviar had to dig deep to get by Muscles for Life, but once he had tackled the opponent, he moved away from the field for the three and three-quarter length win, trotting home in :27.4. Muscles for Life finished second over The Lionking AS and Kevin Wallis for third.

DG’s Caviar was a bit of a surprise to betting fans, paying $9.60 to win and the third choice of the field. The Prime Time Caviar four-year-old horse is owned by breeder Dan Graber. The mile marked a new career best for the stallion, who now has in excess of $118,000 in career earnings.