Dee Rocks, the standout two-year-old filly in Indiana winning 11 of 14 starts, won her qualifier at the Illinois State Fairgrounds Monday, June 29. Now five, the Rockin Image mare won her race in 1:58.2 over a good track. 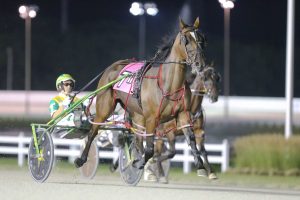 Dee Rocks, shown last year during a race at Harrah’s Hoosier Park with driver Trace Tetrick, won her qualifier at the Illinois State Fairgrounds Monday to prepare for a return to Indiana this season. Photo by Dean Gillette

Trained by Jamaica Patton, Dee Rocks led the way early before being overtaken by Image of a Dream and Michael Knicley. But Stephan Halford II got Dee Rocks back to the lead just after the three-quarters and continued to press on for the win. Image of a Dream was second over Patches Dreamgirl and Jacob Roedl for third.

Dee Rocks is owned by breeders Ronald Phillips and John Carver. She now has 21 career wins in 60 career starts and her best career win was taken last summer at four at Harrah’s Hoosier Park in 1:51.0. Dee Rocks now has in excess of $362,000 in career earnings. Dee Rocks is out of the swift Falcon Seelster mare Incredible Katie, who took a mark of 1:55.2 as a two-year-old. The mare is a 100 percent producer and has a yearling filly by Rockin Image that will be on the track in 2021 named Rockin Roo.

Mike Brink also had an Indiana sired winner at the Illinois State Fairgrounds Monday. Always B Mimi, driven by Brink, moved out for the second half of the race and paced home in :27.4 for the win in 1:58.3. The Always A Virgin filly was a winner over another Indiana sired two-year-old colt Everychanceitake, also by Always A Virgin, from the Tom Simmons barn. Dirty Judge, a freshman son of Rockin Image, finished third for driver Paul Cavett while Time All Over, a daughter of Time to Roll, also Indiana sired, finished fourth.

Always B Mimi is owned by Ed Teefey and was bred by Concord Stud Farm LLC and Birnam Wood Farms.  She is the last foal from the solid brood mare Sportsmistress, who has several six-figure winners from 12 foals, including Home Bed Advantage, who earned more than $575,000 during his career and took a mark of 1:50.1.