Dean Gillette, official photographer for Harrah’s Hoosier Park and the Indiana Standardbred Association magazine, was part of a special feature on track photographers in harness racing. Gillette was part of the September issue of “Hoof Beats” along with Brad Conrad of Ohio, Clive Cohen of Canada, and Chris Gooden of The Meadows. 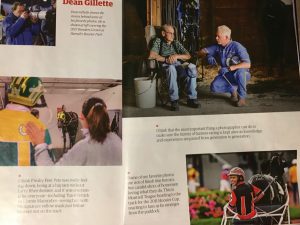 Dean Gillette was one of four photographers in Standardbred racing featured in the September issue of “Hoof Beats.”

The story, penned by Jay Wolf, looks into the different challenges track photographers face, from positioning at the finish line to adverse weather conditions. The story was the second part of a two-part series.

Some of Gillette’s iconic photos were included in the issue. One featured a look of Freaky Feet Pete in the background over the shoulders of Trace Tetrick and Jamie Macomber, who were racing the horse the week after trainer Larry Rheinheimer passed away. Another photo depicts trainer Joe Putnam talking with harness racing legend Frank O’Mara, and a shot of Montrell Teague coming into the paddock at Harrah’s Hoosier Park for the 2011 Hoosier Cup. Gillette noted some of his favorite shots are off the track, ones that he comes across when walking through the barns or paddock.

Gillette also noted he is beginning to work more with video. He has equipment that can mix four cameras and audio, something he continues to work with and perfect to enhance his position in Standardbred racing in the state of Indiana.