The popular annual October issue of the ISA Magazine is quickly approaching and with that said, so is the deadline for ads. Numerous breeders advertise their yearlings in the issue each year and several have already reserved space. Anyone wishing to put an ad in the magazine should do so by Thursday, Aug. 27, 2020. 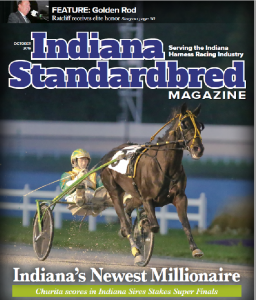 The fourth issue of the ISA Magazine in 2020 is set for October, featuring numerous yearling ads for the upcoming sales. To advertise your yearling, contact Tammy Knox by Thursday, Aug. 27 at tammyknox@ymail.com.

Staff writers of the ISA Magazine are already hard at work on numerous stories. Coverage of the Indiana State Fair and Indiana Sired Fair Circuit will be included along with a story on Curtis Sumpter. Eldorado Resorts recently merged with Caesars Entertainment and a report on the final presentation to the Indiana Horse Racing Commission is earmarked for the issue.

Dan Patch Stakes Night will also be featured, along with Brian Hauck’s new Saltwater Spa New Wave Equine. Several Indiana sired horses will be included as the Hoosier State prepares for the return of the prestigious Breeders Crown the last weekend in October.

In addition to the ad space in the October issue of the ISA Magazine, the ad will be featured on the homepage of the ISA’s Website during the month of October. To reserve a spot, please contact Tammy Knox at tammyknox@ymail.com.