A three-horse photo ended up in a dead heat between two horses Saturday, Nov. 20 at Harrah’s Hoosier Park. Makeitagaingo and Jordan Ross and Sweet Western and Trace Tetrick could not be separated in the photo at the finish line in the conditioned pace for fillies and mares. 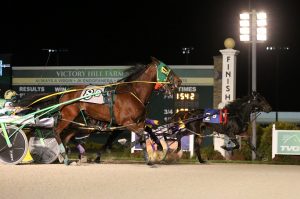 Makeitagaingo and Jordan Ross (inside) and Sweet Western and Trace Tetrick (outside) hit the wire together for a dead heat Saturday, Nov. 20 at Harrah’s Hoosier Park. Photo by Dean Gillette

Kak’s Rockin and John DeLong had the lead early through the first quarter in :27.1. Makeitagaingo was sitting behind in second while Sweet Western wasn’t even part of the conversation through the half and three quarters in :56.1 and 1:25.1. In the stretch, Makeitagaingo made her move up the inside while Sweet Western made her move on the outside, hitting the wire together with Kak’s Rockin between horses just a neck back in third. The duo stopped the timer in 1:52.2 for the win.

Makeitagaingo now has in excess of $74,000 in earnings. The four-year-old daughter of Riggins took a new lifetime mark of 1:52.2 earlier this year.

It was the seventh win of the year for Sweet Western. The five-year-old Western Ideal mare also took a new career best time earlier this year in 1:52.2. She now has more than $112,000 in career earnings.

Also on the card was the featured $22,000 Fillies and Mares Open Handicap with Rockin Nola and Joey Putnam getting the nod as the race favorites and the race winners. The duo was three-wide around the first turn and took over on the lead after the quarter in :26.0. From there, the five-year-old Rockin Image mare turned in an evenly rated mile, scoring the win by one length in 1:51.2, a final panel in :28.0. Drama Act and Trace Tetrick rallied up for second and Somebodyslilly and Peter Wrenn finished third.

Owned by JP Racing LLC and Suttons Bay Racing, Rockin Nola now has 11 wins in 23 starts as she winds down her racing year in 2021. She now has 32 wins in 67 starts and pushed her earnings over the $750,000 mark for her career. Her best time was recorded earlier this season in 1:48.4, which was a track record at the time for older pacing mares before it was passed up later in the year. Plans are to bring the talented Indiana sired horse back to the track in 2022.