Racing fans were treated to quick miles during the second day of racing at the Shelby County Fairgrounds Wednesday, July 18. Seven races were provided beginning at 11 a.m. featuring two-year-old trotters and three-year-old pacers. 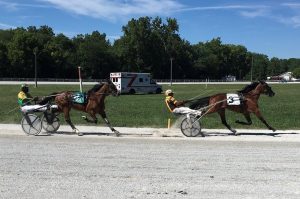 Ashley Oh and Doug Rideout kicked off the second day of racing Wednesday, July 18 with a win in a division of the two-year-old filly trot. (Photo by Megan Arszman, ISBD)

The Charlie Conrad-trained Skyway Quinton roared around the half-mile oval in 1:57.0 during the final race of the day. The Real Desire colt, with Conrad at the controls, turned in a final panel of 28 seconds flat for the win by 16 and three-quarter lengths. Downwyn Shark and Bradley Ferguson finished second over Ramblintime and Gerald Miller, who finished third.

Skyway Quinton earned his third win on the year, picking up a new lifetime mark at the end of June in 1:51.1 at Hoosier Park. The quick sophomore is owned by Sarah, Carson and Carder Conrad. He now has 10 wins in 32 career starts for the Conrad clan.

It was a good day for sire Real Desire as his daughter Indy Rose picked up a gate to wire win in the second division of the three-year-old filly pace. Bradley Ferguson guided Indy Rose home to a two and one-half length win in a time of 2:04.0 over GW’s Golden Dancer and Jordan Ross and Rail Desire, another Real Desire protégé, with Rocky Loney in the bike. 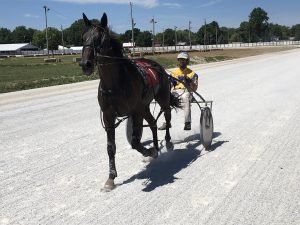 Indy Rose and Bradley Ferguson provided one of two wins on the program Wednesday, July 18 for the Eash Racing Stable at the Shelby County Fairgrounds. (Photo by Megan Arszman, ISBD)

Indy Rose is owned by Eash Racing Stable Inc. and trained by Don Eash. She was one of two winners on the card for the Stable. They also earned a win in the first division of the $3,000 three-year-old filly pace with Summer Rock, driven by Eash, in a time of 2:02.1. Imasharktoo (Ross) finished second followed by Pennyspocketchange (Walter Haynes Jr.)