One of the best named two-year-olds this season is now a race winner. David Allan Whoa, driven by Joey Putnam, won his first race Thursday, Aug. 4 in a division of the $12,500 Johnny Wattles Series for two-year-old pacers at Harrah’s Hoosier Park in dramatic fashion. The freshman stopped the timer in 1:54.2 in only his third career start. 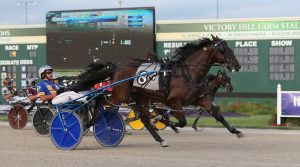 David Allan Whoa and Joey Putnam turned in a big final quarter to score their first win in the Wattles Series at Harrah’s Hoosier Park. Photo by Dean Gillette

David Allan Whoa wasn’t even mentioned early in the race as Rockin Pharoh and John DeLong grabbed the first lead at the quarter in :28.2 followed by Woodside Gunner and Ricky Macomber Jr., who took over at the half in :57.1. David Allan Whoa trailed along in last and could “see ‘em all” around the final turn.

Preston Your Luck and Sam Widger were first over and in a prime spot to take over at the top of the stretch, joining Always Andrew and Atlee Bender for the battle down the lane. Woodside Gunner was also holding steady inside. It wasn’t until near the tote board that Track Announcer Michael Chamberlain pointed out a fast closing David Allan Whoa on the extreme outside, who was playing a fierce tune late in the race. The Tellitlikeitis colt paced home in :26.3 to score the win in 1:54.2, one and one-quarter lengths ahead of Always Andrew and Preston Your Luck in the three-horse photo.

David Allan Whoa made two qualifying starts before debuting in mid-July for the Putnam Stable, making a break and going back to qualifiers. After a strong qualifier, he was back in action in late July before trying his luck in the Wattles Series. Bred by Randy Wilt, the colt is out of the Rocknroll Hanover mare Cinnamon Girl, whose foals take on a tribute to country music legends, including Railin’ Jennings, who has a mark of 1:51.2 and is still racing. David Allan Whoa was a $32,000 yearling purchase from the Hoosier Classic Yearling Sale last fall and was one of 22 foals by Tellitlikeitis that was sold at public auction.

Another Tellitlikeitis son was a winner in the other division of the Wattles Series. Hetolditlikeitwas and John DeLong moved to the lead after the quarter and never looked back, winning by three and three-quarter lengths in 1:53.0, a final quarter in :26.3. Mister Matt and Brandon Bates finished a closing second over Rusneversleeps and Sam Widger for third.

Hetolditlikeitwas was the favorite, paying $2.80 for the win. The gelding is owned by Twila Harts and Alvin Miller with Miller handling the training duties. Victory Hill Farm bred Hetolditlikeitwas, who earned his first win in his fifth start, turning in three second place finishes before his trip to the winner’s circle. He already has $36,000 on his card. His dam, Fancy Desire, took a mark of 1:49.0 during her racing career that included several stakes wins and nearly a half million dollars. However, the Indiana bred mare never raced in the Hoosier State. The daughter of Real Desire spent her career on the East Coast, competing in several big races including the Breeders Crown. Her latest foal, Hetolditlikeitwas, was a $35,000 yearling purchase at the Hoosier Classic Yearling Sale last fall.